Deer brush is a semi-deciduous bush that is polymorphous. Some forms are so nearly evergreen as to be evergreen, eight foot tall, bush - like with nearly glossy large, rounded leaves, while others are clearly deciduous with very narrow pointy leaves and a decumbent habit. Very diverse, plants from the San Benito area are low elevation and evergreen (or very near it), plants from the higher elevations are almost deciduous at first frost. Unpredictable, but generally poor in the inland desert areas and excellent in the mountains. Ceanothus integerrimus is a fairly cold hardy Ceanothus (-10 degrees F.?). Deer brush is a north slope plant that also lives under the shade or part shade of conifers like Coulter Pine, White Fir, and Ponderosa Pine or oaks like Interior Live oak. Soils can range from gravelly granite, red clays to some caliche white clays. In the Santa Lucia mountains deer brush can be found with Ceanothus sorediatus, Ceanothus papillosus roweanus, Ceanothus leucodermis, Quercus chrysolepis and Arbutus menziesii. Click here for more about Mountain Lilacs.

This plant is sold out right now. The worker bees are working on it.
Ceanothus integerrimus with white flowers. 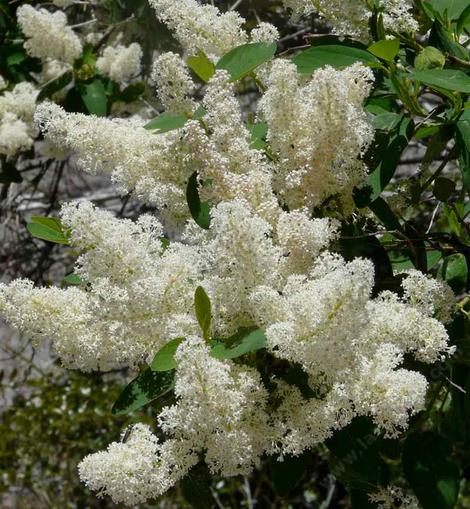 Ceanothus integerrimus as a small bush up by Big Bear.

Ceanothus integerrimus with a Skipper butterfly.