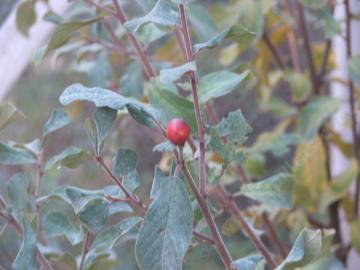 play movie
Rhamnus californica cuspidata form of Coffeberry from the Sierras and inner Coast Ranges of S. California. The only significant difference from this form and the regular species is dentate(small teeth) leaves. In its range it is commonly mixed with Cercocarpus betuloides, Manzanita species, Scrub Oaks, Solidago, Zauschneria, sometimes Salix, and sometimes Cornus. Plant on the edge of regular water for best form. Five to eight feet from a lawn, creek, pond or other water source. They are drought tolerant, much more so than most drought tolerants in the trade, but look beat up if you stress them too much. (Ok, the name Rhamnus californica is now being called Frangula californica.)