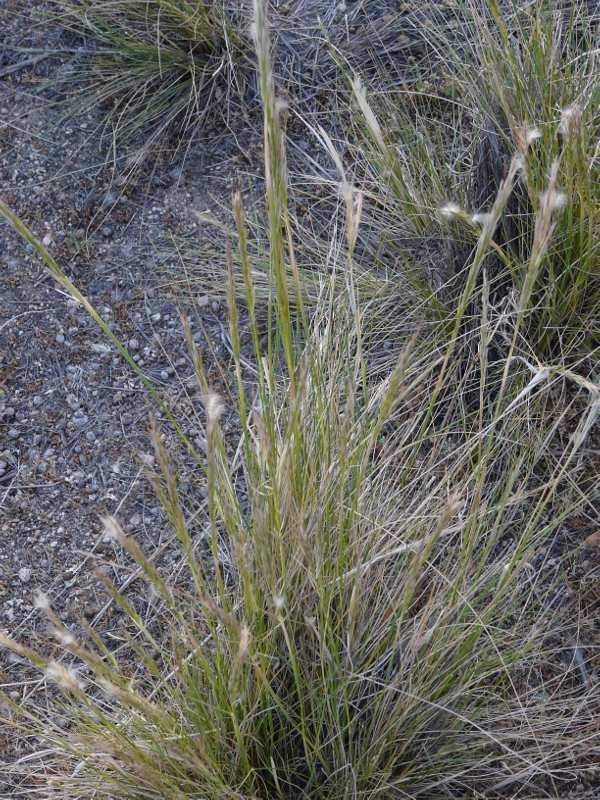 play movie
(Syn. Achnatherum speciosa) Desert needle grass is a 1-2' bunch grass that is native to Mojave and Colorado deserts and the s. Coast ranges and s.Sierra. Use for dry banks and paths , full sun, little water. It looks like a bunch of little white flags being held by a rabbit. Or for you Calif. folks it looks like minature top spikes of Pampus grass. It grows with Artemisia tridentata, and both species of Purshia. The Stipas occur throughout Calif. in many plant communities. They do not form large solid stands except in 20-50' clumps near seeps, but in most areas they stand as locus individuals. (The Indians burned the clumps every few years sometimes smoking up the mountains with plumes of smoke at intervals over great areas. The Indians 'grazed' on tender green annuals, perennials and probably the young Stipa seed heads on their hands and knees. The burning was to facilitate this and to stimulate the clumps.) In the Coastal Prairie and Valley Grassland they occur with annual wildflowers, buckwheats (Eriogonum), Golden Yarrow (Eriophyllum), Salt brush (Atriplex), Sagebrush (Atriplex sp.). The Desert communities have many of these same species along with the bunch grasses. For the bunch grasses to be stable long-term plant the Stipas at 3 ft. intervals with at least some of the wildflowers from the native community between the Stipa. If you can plant a perennial for every 5-10 Stipas all should be happy. If you want to plant an Oak woodland with Stipas, plant them in the open areas between the trees, not under them. Weeds are a problem in these type plantings so keep an eye on them. After the first year or two the planting will be weed free if you keep up on it.