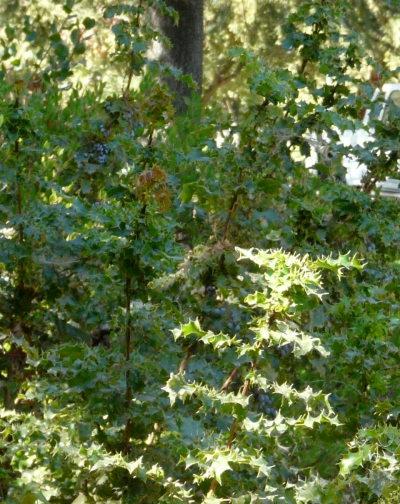 Oregon Grape is an evergreen shrub to 6 feet with creeping rhizomes. It's native from N. Calif. to B.C.. It doesn't mind sun or shade is best with regular water but drought tolerant. Oregon Grape has edible berries birds love (they are best used in jelly). Deer will bother only in heavy deer areas. Easy to take care of and used a lot in doctor's offices and parking lot landscaping.
Excellent plant for those of you in Portland, Eugene, Big Bear lake, or other places that get cold and need an evergreen. It has also done well in the colder interior valleys of California. There are some beautiful hedges of it in Santa Margarita and Paso Robles.
We've had customers have trouble with the Mahonias being defoliated in the lower coastal climates, i.e. S.Ca., by some insect. (Labadie says it's Barberry looper and Lenz says it's called loopers (Coryphista meadii) The plants recover but are leafless for 3-6 months each year. We've never seen the insect as it doesn't seem to survive our lovely climate.
(AKA Berberis Aquifolium)