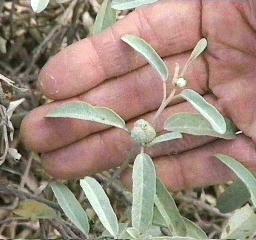 play movie
A small, gray-scurfy perennial, with no perceptible flowers, grows in open areas between shrubs such Ericameria ericoides, Salvia mellifera, Artemisia californica.Lives in the coastal sage scrub and beach areas. The flowers(ha!) appear from summer through fall. Foliage SMELLS like Lemon.The desert form looks identical, but grows in the lower desert. It is called var. mohavensis, good luck telling them apart unless you are standing in the desert, looks the same to me. We have never grown it in any numbers but have wondered many times if it could be used effectively as a groundcover.