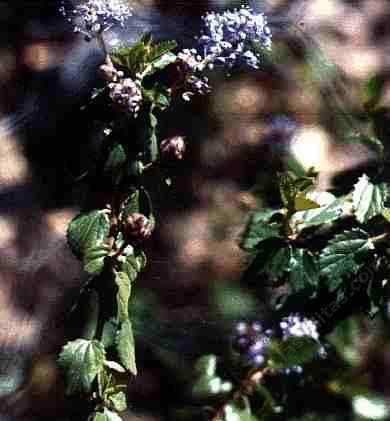 Native to the southern California mountains (a form often listed as C. tomentosus var. olivaceous) and grows on decomposed granite to sandstone. Some companion plants are Quercus agrifolia, Q. cornelius-mulleri, Rhamnus ilicifolia, Cercocarpus betuloides, Diplacus aurantiacus, Adenostoma fasciculatum, Ceanothus cuneatus, and Xylococcus bicolor. A chaparral shrub from the San Diego area that can be utilized where your planting interfaces with the chaparral or where you have no water. The plant is fast, evergreen, and has nice light blue flowers. Protect from deer the first year, then they'll leave it alone. We observed no frost damage at 0 degrees F. It died after being overrun by alien grasses after 17 years. Click here for more about California Lilacs (Ceanothus). Why do the roots of some of the Ceanothus look funny?