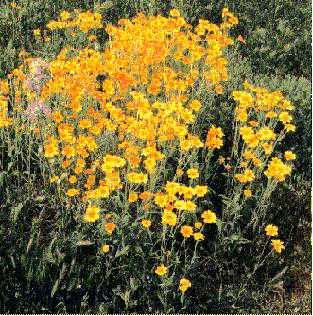 A very showy annual native that lives in openings throughout the interior. Monolopia is one of the annuals that were part of the spring flush(moisture and energy capture) of many of the interior (non-desert) communities. Very showy, but count on it to disappear after 1-2 weeks of hot dry weather. (The plants can be 2 ft. tall when flowering, and nothing but a small pile of seeds after senescence.) Hard to find from seed companies but well worth the effort if you're in an interior valley. Muir " In April, plant-life as a whole reached its greatest height, and the plain overall its varied surface was mantled with a close furred plush of purple and golden corollas. By the end of this month most of the species had ripened their seeds, but undecayed, still seemed to be in bloom from the numerous corolla-like involucres and whorls of chaffy scales of the compositae. In May the bees found only a few deep-set liliaceous plants[probably Chorogalum, Soap Plant] and eriogonums in flower...June, July, August and September was the season of rest and sleep."(from Muir among the Animals, Lisa Mighetto, Sierra Club Books)