In California we have horizontal variation; from the Pacific Northwest to the Desert Southwest, with Mediterranean-like and a cold desert in between. This looks like it is going to get more pronounced  as climate change occurs. The Southwestern Deserts are predicted to to get drier and hotter. The coastal areas are the Mediterranean climate that will have bigger droughts and bigger storms.

There is vertical variation as you go up the Sierra and the Coast Ranges. California has many, many variables with each valley and hill top creating micro-climates that may be harsher or milder.
We have customers whose mailboxes are two USDA Zones or Sunset Zones removed from their house, in a distance of 200 feet. California has climates with temperatures as high as 130 degrees F.(Death Valley, The Colorado and Mojave Desert) and as low as -54 degrees F.( a gold mine in the White Mountains, approximately 30 miles from Death Valley). There are areas only 50 miles from L.A. that have regularly got down to -15 degrees F. and occasionally down to -30 degrees F..


California was much colder when the first explorers were being blown around off the coast in the 1500's and 1600's. Those were arctic gales. California was in an eighty- year drought that intensified the extremes. Ice was hanging off of the Big Sur coast, and the mountains of Big Sur were covered with heavy snow. The water aboard ship froze, and the Salinas river was frozen to the point that a musket couldn't break it. So if Monterey was like present day Reno, what was Reno like, never mind the Bristlecone area?

The hottest plant community is probably Creosote Woodland, particularly in the Salton Sea area (from Indio to El Centro). There they recorded 124 F in May 1896. But, then there's Death Valley with their 134 F in July, 1913, and average high summer temperatures of about 120 F.

The wettest plant community (other than riparian, of course) is probably the redwood belt. But the wettest spot was on the edge of the chaparral/southern oak woodland in Campo, just north of the Mexican border. On August 12, 1891, 11.5 inches of rain in 80 minutes was recorded. The official one-day record was 13.6 inches at San Andreas Lake. This chaparral/oak woodland interface seems to have this characteristic, as 9.2 inches of rainfall in 12 hours fell at the Santa Margarita Nursery site in 1995, the year all the bridges blew out along the Salinas River.

The driest plant community is probably the alkali sink. The bottom of Death Valley sometimes does not see rain. Taft, in shadscale scrub, commonly receives 3 inches, while most of the creosote bush scrub areas receive 3-7 inches of rainfall per year.

The weirdest plant community is chaparral. Rainfall is very variable (we range from 4 to 60 inches per year), temperature varies 50-60 degrees F. per day, and slopes and moisture really count. The top of a slope may be 20 degrees warmer than the bottom of a slope, 100-200 feet away. Ground may be frozen to 12 inches, but the day time temperature is 60 F

Forget evapotranspiration rates, reference evapotranspiration and crop coefficients. They have a lot to do with climate, and ruderals, but little or nothing to do with drought tolerant plants (stress tolerants). Other factors such as plant establishment, plant height, mulch, age of plants on the site, or the fact that you overwatered or fertilized matter a great deal more. Some of the sites in California that are covered in native vegetation should not have any living thing there if judged by evapotranspiration rates (Remember, according to science, bumblebees can't fly!).

In some of the more marginal areas extra winter and spring watering may be required for a few years to restart the forest or scrub plant community. The problem is in fog/cloud drip. The taller vegetation induces a positive-feedback loop that allows the plant community to live (Wilson, J.B. and A.D.Q. Agnew). The plants capture the moisture from fog, and create more fog. If the taller trees/shrubs are not there, the site is between 20-200% drier and effectively creates a negative-feedback that drives succession backwards into a drier plant community that is unstable and ready for invasion by alien species (largely annual grasses). For instance, on Vandenberg Ari Force Base Rainfall is recorded at 14 inches, fog drip adds 24 inches to this. If the native vegetation is removed the fog drip drops to nearly nothing and grasses move in. The grasses absorb a lot of that 14 inches of rainfall and evaporate it off. The Shadscale scrub in the central valley is similar. A large portion of their rainfall comes from the tule fog condensing on the vegetation. Many areas of coastal California including the redwood forest are very sensitive. Once those huge dew collectors are removed there is not enough rainfall to support new ones. ( Redwoods can't survive on 15 inches of rainfall without that huge addition of fog drip) So the plant community moves from Coastal Redwood forest to chaparral. Oak woodland, pine forest or mixed evergreen forest will become weedy coastal sage scrub or chaparral, coastal sage scrub or chaparral declines, is invaded by annual grasses, and becomes grassland, redwoods become weedy northern scrub, etc.

In other marginal areas provide a wind screen for a few seasons to allow the first wind-blocking row of trees/shrubs to grow up. Some areas only have plants as high as the species that tolerates wind. The climate behind the bush or tree is very pleasant compared to the sandy/salty gale on the other side of the wind-tolerant plant. This wind row may only be 2-5 feet high and is common in coastal bluffs or desert edges. People commonly remove the 'scrub' and plant foo-foo plants that look like hell and die. Some people do this for years and are noticed for their lack of intelligence and plastic garden creatures.

If weeds invade a native plant community, the effective rainfall is cut in half, or more.

The individual plants have the USDA zones attached to them primarily for the Easterners.

We have fog, some areas as much as 50% of the year and providing 18.4 to 30.4 cm (7-15 inches) of rainfall from fog drip, other areas never see clouds or fog. Can you imagine an area that gets 330+ days of bright sunshine? Our rainfall in the state ranges from 80 inches, plus 12 inches of fog drip, in the redwoods to 1.5 inches in Death Valley, about 3 inches in Taft, and between in parts of the Sonoran Desert.
For those of you that are new to gardening, or new to an area, ask a neighbor that's been there for awhile and keep bringing him (or her) cookies or bottles of beverage until you figure out what the rainfall and temperatures have been for the last decade or more. If their yard lloks good and has plants you like in it ask about those also.

For those of you back east or in other areas of the world remember that almost all of California does not get summer rain. The only places that do get rain from April to October are the S.E. Deserts and the northern coastal fog belt. Most  areas of California  you would find dry by your standards. In 1841 Santa Barbara had no measurable rainfall and ½inch of fog drip. One of our customers from the Desert Center area told us she had had no rain for three years, but the vegetation still looked good.
On the other hand,the "Great Flood of 1862" filled most of the valleys in California with water after it rained hard for a month around the first of the year in 1862. With climate change we might get double that, or it might not rain at all in a period of just a few years. If it stays dry for a decade or so, California can get VERY cold.

The extreme records in the Santa Margarita nursery: 95 degrees F.(35 C.) for a couple of weeks in Feb., followed by a 12 degrees F(-10 C) night. 118 degrees F (48 degrees C.) for five days in the heavy shade, it was cool there, at least 10 degrees cooler than out in the sun where most of the plants were. There was also a 20-30 mph (10 mps) wind with 10% humidity. We've had as little as 4 and 7 inches of rainfall or as much as 55 inches in the last 40 years. We have had as much as 4-5"(10 cm) of rain or 10"(25 cm) of snow in a morning before and gone for 10 months with no rain. Historical records say California was much drier and colder 400 years ago with temperatures 30 F degrees cooler in the winter and slightly hotter in summer. A period of an 80 year drought ended as the Europeans showed up. Ice hung off Big Sur bluffs and the Salinas River in Monterey was frozen to 6" or more in 1608. (Cabrillo) Customers set us to giggles when they tell us how cold a 28F temp is!

Blowing clouds or fog can contribute a lot of moisture if there are plants left. 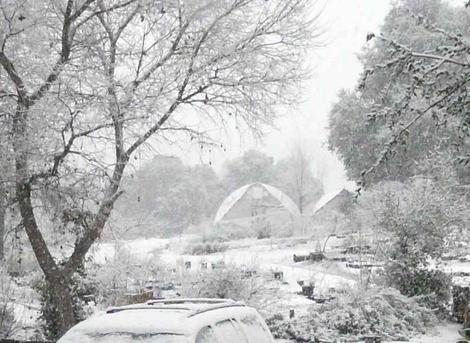 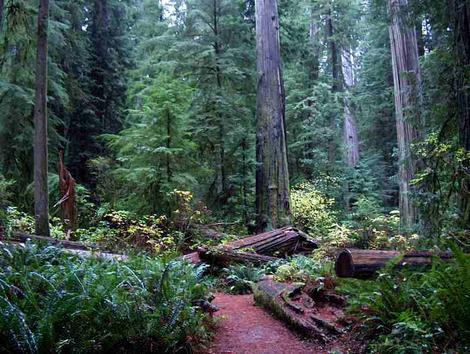 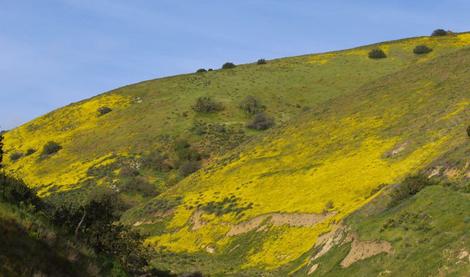 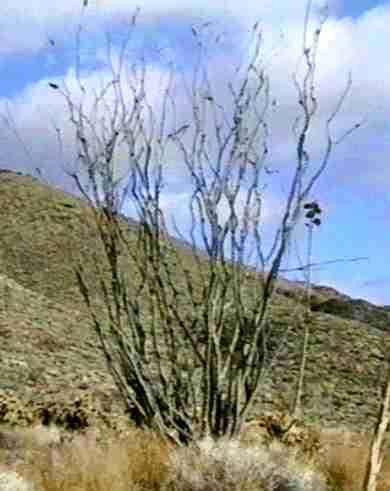 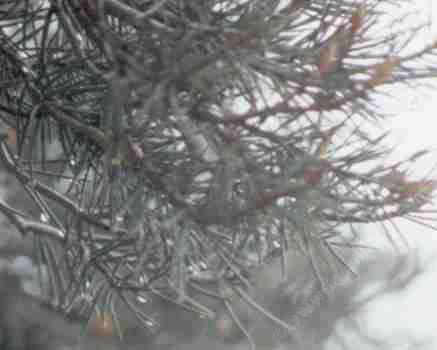 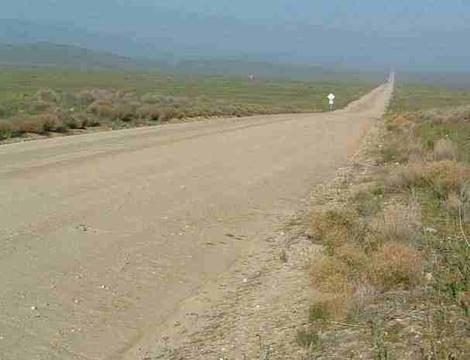 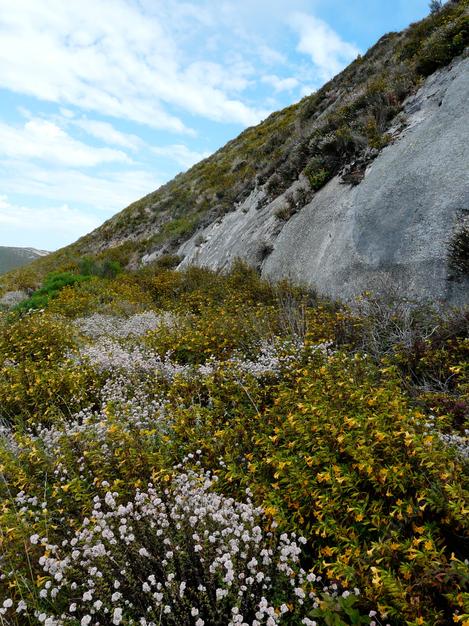 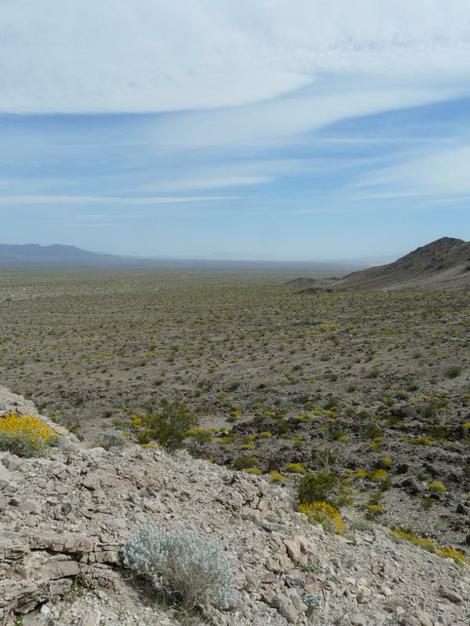 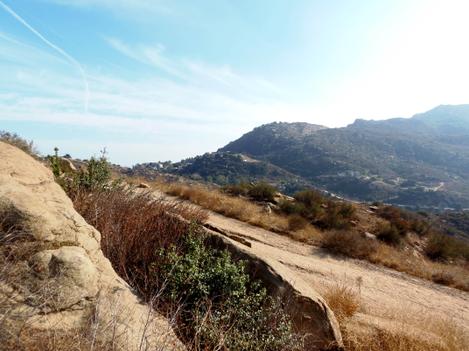 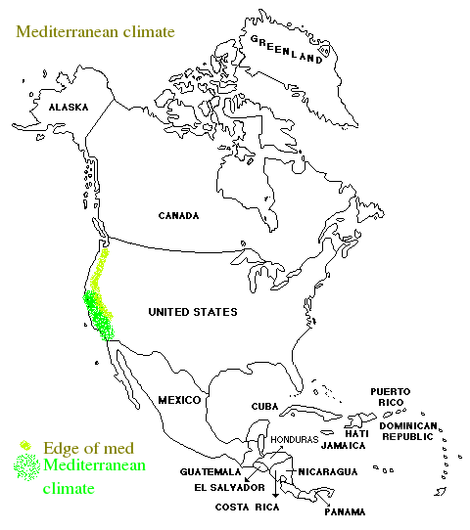