Las Pilitas Nursery | Shop
Looks different? Website Upgrade
Native Plants Nature of California Native gardens Native Plant Pictures Selected Native Plants Garden DIY Birds and the Bees.
A couple of years ago Penstemon Margarita BOP made a splash in Britain.
We seem to be creating a little buzz in Europe. Folks there interested in what we're doing. Two of them showed up right before Christmas. An owner of a nursery and his foreman were very interested in our plants and took a few home. So maybe Arctostaphylos Ramona, Austin Griffin or Mama Bear will show up in French Nurseries in a few years.
He thought where his nursery was in France was hot and dry. They rarely  get above 100F(38C), their last rain in in June or July, their first rain is in October and their humidities are in the 30% in dead summer. We thought it sounded just like the Cascades. They were lost for words when they heard our swings.
These guys braved a blizzard in Utah, the Grand Canyon and a stop in Bakersfield before visiting here. They said the Grand Canyon was barren and the blizzard and Bakersfield were scary.... 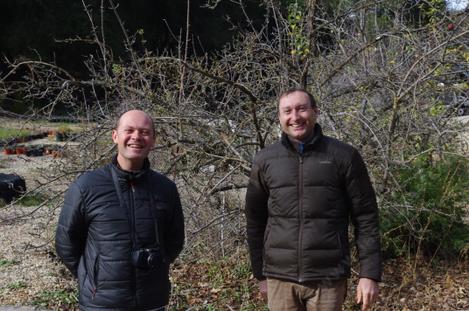