Lives in  western conifer forests and coast ranges during the late spring and summer. In winter Western tanager moves south to Mexico and Central America, or  slums in the parks and suburbs in the winter  . In our Santa Margarita nursery we are seeing them all year. Western Tanager eats bugs and berries. The bugs are mostly from the canopy, bark, leaves and twigs of conifers or in midair.
Western Tanager is a  strong flier, picking off insects in flight or foraging upside down in conifers looking for bugs that are tasty.

Western Tanager  wanders around the nursery looking lost and gun shy. Both the male and female appear to be intelligent since they fly away whenever a human gets close enough to take a picture.

I noticed the male taking a bath in one of the puddles in a driveway as I was driving one the nursery trucks. The nursery trucks have cracked windshields that only get clean when we can't see the road. Mr. Tanager was fine as long as the camera and I were on the other side of the dirty glass, once the camera came out he was gone. This Western Tanager, Piranga ludoviciana, has visited the birdbath every day from June through August. 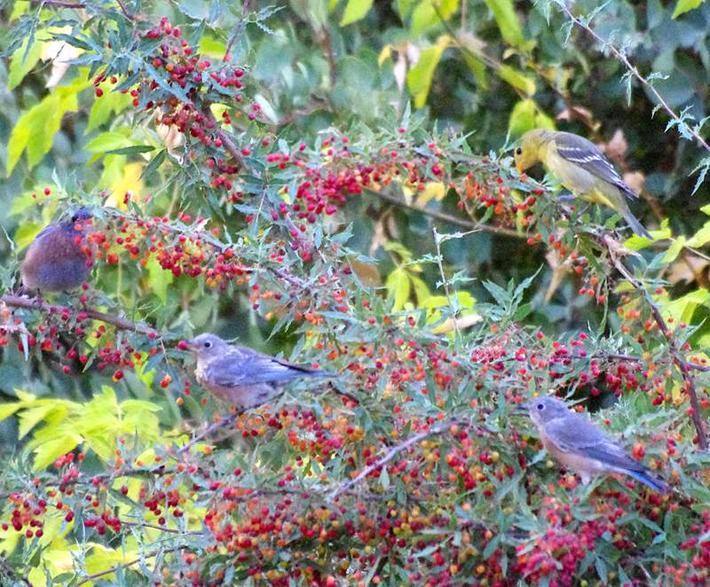 I have no idea what this tanager was thinking. sHe's yellow, they're blue! Breakfast in a Mahonia nevinii.