Potatoes, indigenous to South America, produce more nutritious food per area than any other major carbohydrate crop. Potatoes are loaded with vitamins, minerals, starch, and even have some protein. The Irish lived on potatoes and milk/cheese and cabbage almost exclusively, and grew a country that way. Growing and Soil Conditions - Potatoes like cool temperatures; not too hot and not too cold. Below freezing is not good. Above 70 F is not great. Rich organic sandy loam soil is good; heavy clay soil is not. Soil should be slightly acidic. Add compost, and till in. If soil is poor, plant cover crop (faba beans/garbanzo beans with wheat; peas with oats); in September- October, or lima beans and panic grass in April-May and right when bean/pea flowers start to open, till under cover crop; let a few weeks go by before planting potatoes. 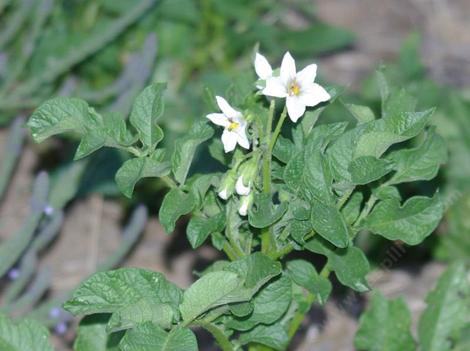 White flowers of potato.
Planting Time-No frost winter or spring, plant in January; Or plant in spring, two weeks before last frost. Or plant summer for a fall crop. Sacramento Valley- Feb-Mar & Jul-Aug. San Joaquin Valley-Dec-Jan & Jul-Aug. Mountains-May. Coastal- Mar-Jun. South-Nov-Jan &Jul-Aug. Best results to Plant small whole potatoes; Planting Methods Dig hole, length of hand, place potato in hole, cover with dirt; Plant spuds 12 inches apart, in rows 2 1/2 feet apart. Or you set spud on ground, cover with a bit of hay, adding more around the plant base as plant grows, if you don't have western harvest mice, which build nests above ground in the hay (I do); Or you can plant in a large planter or planting box or pot (fill 1/3 with dirt to start)(pots & wire at county recycling center); Or, if gophers are thick, better to plant in pots/boxes reinforced with chicken wire, on bottoms and up sides a foot or two; Or you can trap gophers (no fun). An alternative method which a clever gardener named Cynthia uses is to plant in a plastic hoop house, in the fall, to grow over the winter, for a spring crop, in the colder winter climates. The whole floor of her greenhouse is dug down around three feet deep, then filled with sharp 3/4 inch gravel to absorb and radiate heat. Also the gophers do not seem to like digging through 3 feet of sharp gravel. Then she plants the potato in a 15 gallon pot filled with her special potting mix (mostly compost, with some soil mixed in) in the bottom of the pot, and gradually fills the pot with more soil, as the potato grows. Beautiful crop and great yield!
Companion Plants Potatoes grow better with good companion plants/intercrops. Greatest yield drop occurs during time up to tuber formation. So plant or set out intercrop a few weeks after potatoes are planted. Traditional ones are: bush beans and corn (3 potato pls to 1 corn/bean combo) with Mentha, or potatoes mixed with cabbage interspersed with Salvia. Some other more unusual plants that grow naturally with potato are Verbena, Tropaeolum, Senecio, Ipomoea (I. batatas, sweet potato) Calceolaria, Oxalis (watch out as several of these are invasive weeds), and Urtica (leaves sting; wear gloves when handling plant). For pest control, all plant species in the same row have worked better than separate rows. Also, other plants in the Solanaceae family such as tomatillo (Physalis), peppers (Capsicum), other species of Solanum such as eggplant, and tomato and planting several varieties of potato, also slow down the pests (attract them away from your favorite potatoes!). To attract insect predators/parasites , add diversity, and as trap crops, along the garden edges, just beyond the path encircling the garden, Datura (very pretty and very poisonous), annual Nicotiana (wild tobacco), Solanum umbelliferum, Solanum xanti, other non-weedy indigenous Solanum species, Berberis, Stipa (Nasella), Bidens, Cassia, Opuntia (edible pads), Astragalus (very poisonous to livestock), Baccharis, Lupine, and Stachys can be planted. 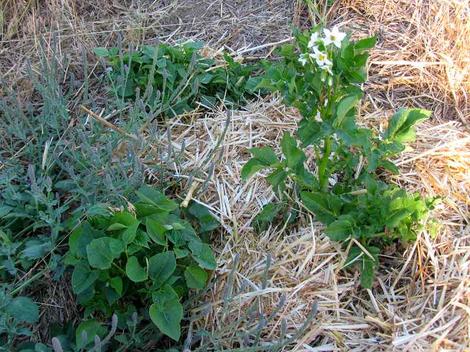 Here Beans and Potato are growing together, with Verbena in the upper left of photo. The heavy mulch of straw caused problems. Not because of the mulch, but because of the mice living under the thatch hut we made with the mulch. If you're raising mice this is an excellent method. If not, use a thin layer of mulch. Better yet to compost the straw with animal/green manure, which saves nitrogen, and then add the finished compost as a thin mulch layer.
Watering- Water regularly if it does not rain, once a week. Soaker hose works great. Mulch the top of the ground with 2-4 inches of compost. Hilling-As plant grows, bank up soil around base of plant. Harvesting-When plant flowers, you can start to harvest small spuds; when plants appear with some yellow leaves or are shriveled, and dying down, then older, mature spuds are ready; cut off plants at ground level, remove, wait a week or two, then dig up and harvest potatoes, place them loosely, one layer deep, in cardboard boxes, in dark cupboard, to dry a bit. Storage Store them in refrigerator, in plastic bag with holes punched in it for air, so they can breathe, and don't get slimy (will last about 1 year). 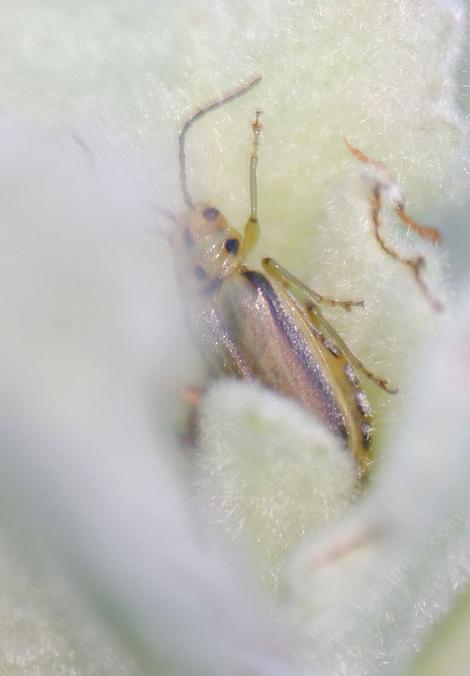 Some of the pests are a pain, like the Three-Lined Potato Beetle .
Recipe- Scalloped Potatoes- (If in a hurry, microwave spuds until partially done). Slice several large potatoes very thinly into a big bowl, peel or not; Very thinly slice a small yellow onion into another bowl; 2 slices bacon (if you have it); dice them. Shred 1/2 lb hard cheese (gruyere is best, but any cheese should work) into another bowl. Saute onions in butter in a skillet until almost done; add chunks of bacon, and saute until cooked. Smear unsalted butter (if you have it) or regular butter, in a 9" X 13" pan on bottom and up sides. Put one layer of potato slices on bottom of pan; Lightly sprinkle salt on potatoes. Sprinkle some onion/bacon mixture over spuds. Sprinkle on some shredded cheese Repeat until all ingredients are used up. Sprinkle a little extra cheese on top of all, then pour half- and- half, or cream (if you have it) over all, to kind of fill in the spaces, about 1-2 cups. Bake in oven at 325-350 F. until fork goes into potatoes easily; they are done! Tin foil or metal cookie sheet on top is best for most of the time; take off last 15 minutes or so, to golden brown the cheese.
Other places you might find us roaming about: