Las Pilitas Nursery | Shop
Looks different? Website Upgrade
Native Plants Nature of California Native gardens Native Plant Pictures Selected Native Plants Garden DIY Birds and the Bees.
Here is a glimpse of our page editor. Many of you have asked 'why can't'.... The reality is there just is no one to do it. There was a lot of protesting about this blog as to where is the time to do it?
The Escondido operation has two people, Ian manages the back end of the web site part time from Oakland, The Santa Margarita operation has two full time and two part time. That's the woman power(more women than men).
Someone wants to buy a lot of plants or donate a lot of money that would change
Ok, here's the editor.
This is the first section of the Zauschneria page. Ian wrote an page editor that set the page in a grid that is 24 columns across. I get to drop stuff into that grid. The stuff is preformed in an other editor. So the images are entered in an image editor, the movies in a movie editor. You basically that all the parts of the page and build them independently and then assemble them into a page.
For a while this was detracting from all creativity, but we've ironed most of the bugs out and it now works fairly well. It also means that I do not crash the server with nearly as much frequency. 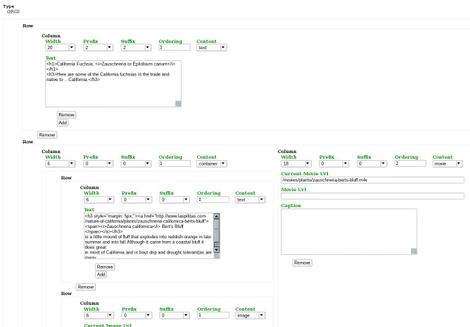 Although this is only one section of one page I had to break the screen capture into 3 pieces so you could read it.
We then check the pages with W3C, and on the Nook Color and Ipad to make sure they work. (One of you (Viv C.) donated enough for those.) 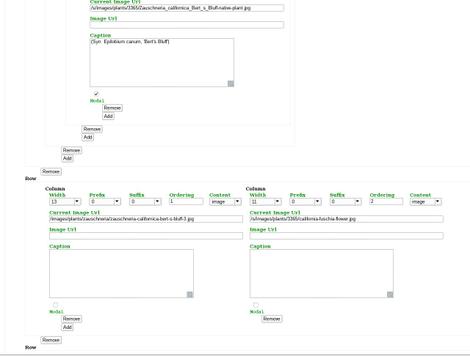 The editor allows limited mark up in html and it has spell check. I cannot write without spell check.
When I was writing the original catalog and living on 4 hours sleep for a year the sentences would be sometimes so screwed up I couldn't figure out what I'd typed. One sentence read something like this
.llat toof eerht ot sworg tnalp sihT
There were no misspellings, just backwards. I couldn't figure it out when I typed it, knew something was wrong, so I stopped and went to bed. Got up and found the 'note'.
The downside of this is this is the little box that the pages and this blog are generated in.
Sometimes I feel like I'm throwing 'Hello World' through a porthole. 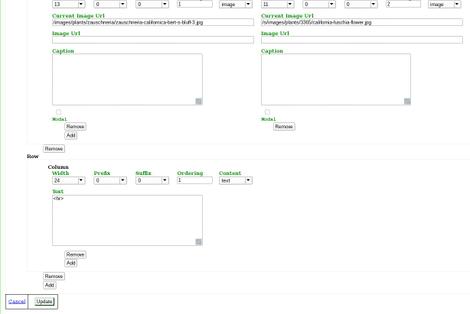