Having a garden in most of California usually includes the presence of pocket gophers ( Thomomys bottae), those animals that live underground and silently eat your plants, so that when you visit the garden the next morning, things are not looking so good. Some plants are wilted, and when you touch the plant to discover the problem, you find the plant has been sliced off just above ground level, or there are sunken areas in the garden where plants used to live ( they have been sucked into the underground world of the gopher, to be eaten).

One gopher can do lots of plant damage. In the experimental garden, it was a waiting game for all the predators (gophers are preyed upon by "owls, hawks, coyotes, foxes, skunks, badgers, bobcats, ... weasels, and snakes" (Maser et al. 1981)) to appear, as one potato after another was eaten (potatoes, not the top, which was left, wilted, on top of the ground, grrrr!), until 22 of the 25 potato plants were killed. Since it seemed the predators had dinner elsewhere, out came the gopher trap, baited with a small piece of fresh apple and a small chunk of fresh carrot, and one gopher was dispatched. It was given as an offering to the vultures, since the predators did not seem to be helping much. (Though I will bet they did eat some gophers, and if the predators were not there, the numbers of gophers would have been even higher!). 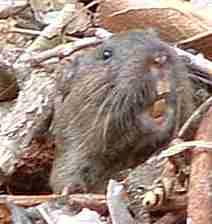 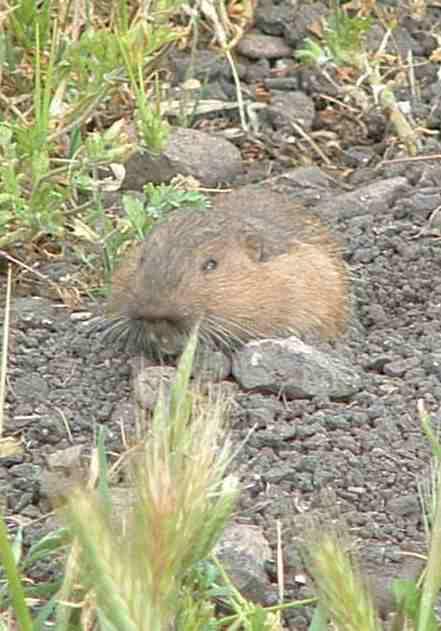 Notice all the dirt this Pocket gopher Thomomys bottae has created


Gophers eat mostly roots, bulbs, (loves potatoes, carrots, and other juicy underground storage parts of plants) and store acorns, bulbs, and seeds of forbs and grasses in underground caches. Gophers prefer plants with a big juicy tap root (like a carrot) over plants with a fibrous root system (like a wheat plant), but will eat many kinds of plant roots. Reports are that they love alfalfa and dandelion plants. Even though they are mostly attracted to the roots they sometimes also eat stems and leaves at the same time, so effectively many times taking out the whole plant! They prefer areas with rich soils and lots of thick-rooted herbaceous plants.

In the experimental garden, gophers did not bother the wheat, fava beans, and corn/bean/squash combination
much (which was under no-till), but they enjoyed the dill and the potatoes (hand-tilled area). All they were missing were the sweet pickle relish, and onions for a great potato salad!
A gopher needs dirt, an area of gound in which to build a home, mostly ruderal plant species to eat, and an area that is not inundated with water to survive. Gophers breathe air like we do, and if the soil is soaked with water, no oxygen will be present and they will suffocate.

Gophers are active all year around, and live underground, in burrows that they dig themselves. Gophers find their food by sense of smell. They either dig a tunnel toward a good-smelling plant, or come upon the plant randomly in their digging, smell the plant, and then either pull the plant into their tunnel and eat it, or chew on the roots of the plant, or continue digging. Also, gophers take their food down into their burrow and store it for later use, and the burrow can be 6 feet or deeper below the surface ( guess we wont be seeing those potatoes anytime soon, or ever again). They dont see or hear too well, and use the whiskers on their face and hairs on their tail to help them navigate their way around their underground world.

Only one gopher lives in each burrow system consisting of a main burrow and burrow side branches, and between each burrow system is a zone not used by any gopher; this zone is kind of like a demilitarized zone, a space that neither neighboring gopher uses, maybe to reduce conflict (gophers are very territorial). Gophers expend so much energy building their burrows, many, many times more than any animal aboveground, that they probably have no extra energy for fighting. Their territory (their burrow system) size, and the size of the"demilitarized zone" changes somewhat depending on the amount and quality of plant material (food) present.

If you see a large fresh (usually darker and moister-looking than the surrounding soil) mound of soil, that is probably the sign of the presence of a gopher, and if you dig carefully, in the mound, you will see a little tunnel, slightly off center of the mound, usually several inches in diameter ( a tunnel branch). You have to dig a little bit to find it, as they block the tunnel with a small plug of dirt (to hide tunnel entrance from predators, and keep their home at an even, comfortable temperature and humidity); pretty smart, huh? That tunnel is one area where you can set a trap, down into the tunnel several inches, baited with potatoes, carrots, apples, etc. A light chain attached to the trap at one end and attached to an 8 inch square of plywood at the other end of the chain, keeps the trap from being carried away by the gopher or a predator. Place the trap a few inches into the tunnel, place the wood over the hole you have dug to find the tunnel, and cover the edges of the wood with straw/moist dirt, to block the light, from going into the tunnel; this method has worked here in the experimental garden. The main tunnel is deeper, harder to reach, and you have to dig up more of your garden to get to it, so start first on the tunnel at the soil mound, though reports state that a trap in the main tunnel is more successful.


Positive Actions- The Purpose of a Gopher

What is the real purpose of gophers? Noone really knows. But here are a few observations researchers have noted so far. Gophers mix and aerate the soil, bringing deeper layers of soil to the surface when they create the soil mounds, where, over time, the effects of light, water, and wind, make those soil minerals available to plants. Thus, soil fertility is increased. Aerating the soil adds oxygen, which aids the growth of certain plant species. The activities of gophers increase plant diversity, as different species of plants grow on those soil mounds, plants whose germination and growth were inhibited in the surrounding soil. The mounds of soil they push to the surface in the process of digging their tunnels, actually reduce erosion on steep slopes. Scientists have speculated that gophers may help to prevent the extinction of certain ruderal/early successional plant species (whose seeds may only have a certain life span), by periodically providing the perfect growing conditions for their germination and growth, in a natural plant community, such as a forest. Also, gophers are food for many types of predators, as I mentioned earlier. When a gopher leaves the area and moves to a new spot with fresh plant material, the burrow system that the gopher has abandoned becomes a home for a toad, snake, etc.

Gophers are found in disturbed/early successional plant communities (a vegetable garden is a good artificial example!!).
Their activities are similar to our activities, but they are far better at it than we are; excavating and tilling the soil just so, to create the optimum soil and light conditions  (on and adjacent to those soil mounds) for the growth of most annual garden plants.  Maybe we could use their efforts to aid us in growing our gardens, but keep their numbers low enough that we may get some yield from our crops.
We need fertile soil to grow good crops (gophers increase soil fertility).
We need plant diversity in our gardens to inhibit pests/diseases (gophers increase plant diversity)
We need light, fluffy aerated soil to grow the best crops (gophers aerate the soil)

Checking for the presence of gophers regularly once a week, all year round, and checking every day in the spring, will protect your garden from being overrun, as they can reproduce several times per year.
Watering the whole surface of the garden regularly, with overhead sprinklers, (rather than watering small areas with drip/microspray emitters), especially in heavier soils, reduces the number of gophers present, if you have a high value crop you want to protect.
Grow plants in raised beds, with chicken wire on the bottom and up the sides of the bed, to prevent gopher damage.
Trapping gophers is very easy.

This gopher snake is looking for a bite to eat.
Other places you might find us roaming about: