Weeds and their effect on the Ecosystem

We first observed the significance of the effects of weeds on a native ecosystem when the Santa Margarita Lake watershed area was aerially seeded with Blando Brome (Bromus hordeaceus) after a wildfire in 1985. (The seed was contaminated with other major weeds of California, such as Yellow Star Thistle, or Centaurea solstitialis.) Over the next decade we saw the area degrade terribly, the weeds spread, the fires increase, and the water-holding capacity of the land decrease. All the explanations for these observations are found in the reference section. (That is another book in itself!)

The chaparral is a plant community that has evolved with fire. Fire usually happens in the dry season of summer. Fire normally occurs every 120-240 years. A fascinating succession takes place in this plant community after a fire. Well, at this critical period, both the plants and the microorganisms are vulnerable. All the plants that you see above ground are gone, burnt up, and so they cannot transport food (that is made by their green leaves with the help of the sun), to the microorganisms. The microorganisms need this food so they can survive, and can live only several months without the plants help. These tiny microorganisms also move water and nutrients from plant to plant, and to themselves when needed. So, to repeat; after a fire, this transfer of nutrients and food and water stops temporarily, and the plant community is in a critical period, until this transfer can resume. The soil is bare; no plants shade the soil or protect the soil and the area looks like a moonscape. Well, the eyes do deceive us; It is not a moonscape. Immediately the rains begin in late fall, and the tiny fire-follower annuals germinate and cover the ground so thickly that you can not see any soil between them; they connect to the underground organisms, and start sending food to the microorganisms. In turn, the microorganisms start transporting nutrients to the burnt-up plants so that they can regrow from the ground up. Many of the shrubs, in the chaparral resprout from the base of the plant. They were not, in fact, dead. Just the tops had been burnt off. The root system and the associated microorganisms were still very much alive.

Weeds that are wholesale seeded onto this vulnerable chaparral plant community after a fire, replace the fire-followers, cripple the microorganisms and, in turn, the native shrubs, block succession, lower the water-holding capacity of the soil, increase runoff, increase erosion, increase fire frequency, etc. The shorter the fire frequency, the more likely the site will be a weedy mess.

Next, there is the deleterious effect of weeds on oak trees. When removing the weeds, the oak trees stop dropping large dead branches, and new growth starts appearing and the whole tree has a different appearance, much healthier-looking, lots of shiny, green leaves, with hardly any yellowish or dead leaves, whereas before the leaves were dull green, with many yellow and dead leaves, and many twigs and branches were dead. And all this happened, just by removing the weeds!! The litter layer of dead oak leaves that drop to the ground seasonally or periodically, depending upon it being an evergreen oak or a deciduous oak, is critical to the health of the oak tree. The weeds block the litter layer from forming and take the water and nutrition from the oak, eventually helping to kill the tree. AT the interface of the soil and the litter layer is where specific microorganisms live, extracting nutrients from the litter, and also preventing other organisms from extracting nutrients from the oak leaves. This method of acquiring nutrition, for the oak tree via the litter, via the microorganisms, is blocked when weeds appear under the oak trees. The same holds true for pine trees.

Third, the weeds can spread throughout an area via early germination and vigorous unchecked growth (no natural checks and balances), displacing the native annual wildflowers, and turning a beautiful wildflower meadow with many kinds of flowers into a mass of annual weeds of one or two kinds, thickly covering the ground, and filling the spot with dry, dead tissue in the summer, that does not disintegrate, and poses a fire hazard.

Fourth, some of the worst weeds are the favorite food of ground squirrels, and mice, which in turn help to disseminate the seed throughout an area. So, the weedy field then becomes a breeding ground for rodents, and you end up with an unnaturally high population of rodents AND a weedy field, instead of a wildflower meadow!

The Message: Remove the weeds!!! 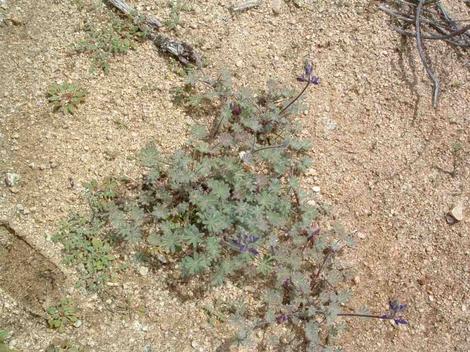 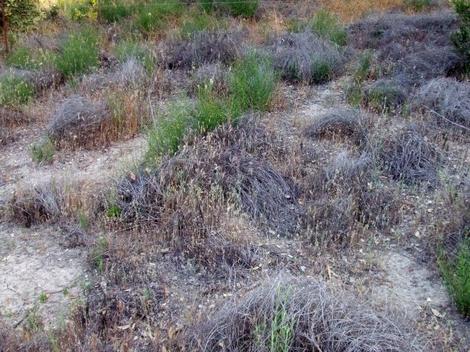 Large areas of California are a mess. 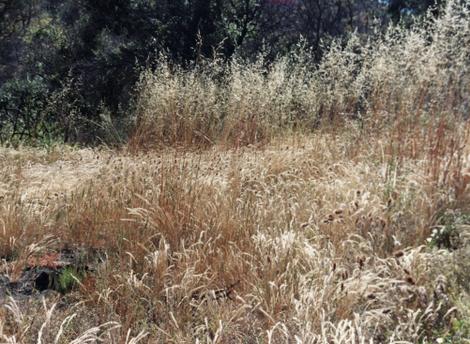 After fire with weeds present.

After fire with no weeds present.

The video is the after photo, the photo is the before photo. The video will need a minute or so to load before it will start.