A Little History (and some guessing) About: The first “official” public road coming into Las Pilitas canyon was surveyed in 1886 by then county surveyor E. Carpenter. This dirt road forded the Salinas River at a crossing very close to the spot where the present new million dollar concrete bridge exists today.

This road was officially called the “Rinconada and Pilitas Public Road”. ( However, some of the early maps also called this the San Jose road because the Pozo area was originally called San Jose by its earliest settlers.) The Salinas River crossing proved to be hazardous due to a soft channel bottom and high water during winter. So, in 1898 a group of early resident pioneers petitioned the board of supervisors for a new road with a better crossing location farther upstream where the riverbed was rocky. The last names of the signatures on this petition in 1898 follow:


When the first 1886 road was built, the surrounding property at the River was owned by Jose Ramon and C.J. Blanco. Mike Wagster of the Rinconada Ranch suggests that the Blanco family may have had some connection to the Santa Margarita Ranch and its early owner, Joaquin Estrada, and may have been employed by the ranch.

The second road (1898) was surveyed by then county surveyor V. H. Woods. This road was proposed as a 60 foot wide dirt road, and the new crossing was an apparent improvement. Then, in 1916 plans were made to bridge the river for year-around access, and a steel bridge was designed and engineered by then county surveyor Austin Frank Parsons, who came to California from Ohio as an educator and engineer in 1876. The office of county surveyor was an elected position of prominence in those days, and was similar in stature to that of county supervisor. The surveyor was also the county engineer, the road commissioner, the public works director, and the overseer of property boundaries, all rolled into one person and his staff. In 1916, along with the steel bridge, Parsons also surveyed a new (third) road on higher ground and westerly of the previous two roads. This is the present road today (2010).

The property surrounding this road and bridge was then owned by Minnie Goforth. Minnie Goforth was paid the sum of $250.00 by the county for this new road alignment plus the bridge site itself. The steel bridge was built on the same concrete abutments that are there today. The bridge is 16 feet wide with a 150 foot span. It was supplied (and probably erected) by the Gutleben Brothers Builders from San Francisco who were prominent steel bridge builders of the era.


There were a number of similar steel bridges engineered by Parsons in San Luis Obispo County during this period, but only 2 or 3 remain today. From 1916 to 1948 the north end of the steel bridge did not have the present-day extension. In 1948 the county added this 78 foot “Timber Trestle Post Bridge”, apparently to allow more water volume to pass under both structures. Santa Margarita resident Herb Brazzi, who lived from 1932 to 1936 near the bridge, suggests that when the Corps of Engineers built the Salinas Dam in 1941, it was common knowledge that 1941 was an extremely wet year and the Salinas Reservoir filled up very quickly. The dam developed a crack when the dam was full, and he remembers that the engineers were so concerned that they made the people living at the time in the Garden Farms area of Santa Margarita evacuate their residences until it could be determined that the dam was safe. So, perhaps floodwaters were the main reason the bridge extension was built. The cost to build this extension was $12,200.00 which was shared equally by the state and county. The surrounding property at this time was owned by Edith, Bessie, and Bertha Butchers. They received the sum of $50.00 from the county for property acquisition. Mr. Brazzi states that in 1936 when he lived near the bridge that the road and bridge was paved. Charlene Abeloe (the Kusta property) agrees. However, Al Kahler states that he believes the main road was dirt until about 1948 when it was then just oiled. He says it was later chip-sealed once or twice, until in 1984 it was overlayed with a layer of hot asphalt to make the present road we have today in 2010.

In 1963, the bridge was sandblasted, cleaned, and painted at a cost of $5,900 by Archie Peckham of Fresno, Ca. At this time, the road was still called Rinconada-Las Pilitas, and also County Road #48. Today, it is called Las Pilitas County Road #3100. I do not have any record of painting after 1963, but it likely may have been.

In 2006, the present poured concrete bridge was built at a cost of over one million dollars. The funds came from a federal bridge grant established only for really old bridge replacements. When the county received the grant funds, they then wanted to use the money for other bridge replacements that they considered more urgent, but the Las Pilitas had the only bridge that met the grant requirements, and so we got our new bridge.The property surrounding both bridges today is owned by the Hobson Brothers Packing Company and is leased by Mike Wagster & his family who live on Pozo Road. Please respect their property rights by not intruding unless you have their permission. 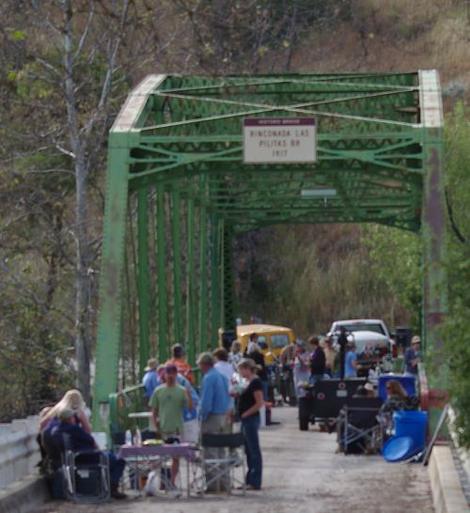 Editor's Note: Over the years Roy Parsons and Sid Hudson have put together many neighborhood watch meetings, this one was a Bea Parsons party. Half of the people on our road show up for these. Because of Roy's parties we know people miles away better than folks in town know their next door neighbor. 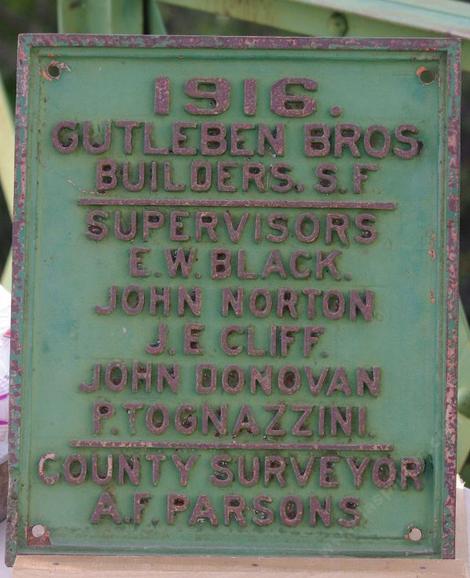 The bronze plaque of the bridge.
Other places you might find us roaming about: