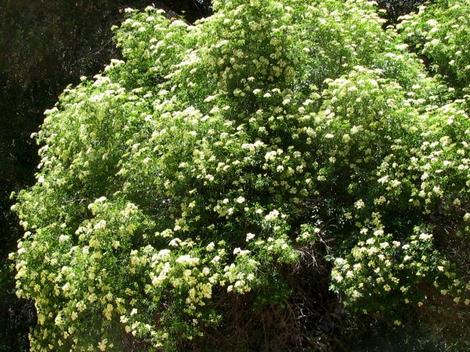 Elderberry has edible fruits(cooked) and attracts many species of birds to the garden.

Plants that should be in every California garden- These particular types and species of plants possess many attributes, such as detoxifying environmental pollutants, attracting the most species of birds, defining the environment, and/or are VIP (very important plants!) genera/species of these California central coast range plant communities.

Plants that no garden should be without in California are VIP (Very Important Plants); Plants that have a large effect on the habitat, and affect many other species, in a good way, are Pine, Oak and Willow. A small tree/large shrub that attracts the most species of birds here is the Elderberry (Sambucus mexicana) Plants that attract the most variety of small pollinators,predators,and parasites, called beneficial insects, are native plants in the Asteraceae, Lamiaceae, Hydrophyllaceae, Polygonaceae, Apiaceae, and Rosaceae families. Examples are Baccharis, Corethrogyne (Lessingia), Erigeron, Hemizonia, Achillea, Phacelia, Heterotheca, Stachys, Mentha, Rubus, Agastache, Salvia, Eriogonum, Solidago, Cirsium, Artemisia, Daucus, and many more.

Plants that, by way of nodules on their roots, in association with bacteria, that live inside this nodule, change nitrogen from the air into a form that the roots of other plants can pick up from the soil, are called nitrogen-fixing plants. Some examples are peas, beans, Alnus, Lotus, Trifolium, Lupinus, Cercocarpus, Ceanothus, and mesquite.

The single most important factor that will decide what your garden areas look like is water. So you want to add just enough water to keep the plants healthy, but not too much, or you start moving the area to an earlier successional plant community, and usually then weed populations increase, oxygen soil levels decrease, and and mycorrhizal garden plants actually don't grow as well.

If you stop tilling the soil, populations of small soil organisms, that aerate soil, and ground dwelling crop pollinators, will increase. Then, after a certain period of time, depending on the plant zone you are creating, soil flora, fauna, chemical makeup, and texture, as a result of tilling regimen (how often you till) and mulch type, will change and annual crops will be inhibited. Research demonstrates that the composition of mulch has a significant impact upon plant communities. Appropriate mulch makes the garden area more stable. Inappropriate mulch can turn the garden area into a mess of mostly weeds and a few weak, unhealthy garden plants.

Natural mulch can be twigs and leaves that fall off of plants growing in the area, and poop of animals that have lived in the area. The type of plant that originally made up the mulch determines the direction of plant succession. Mulch does have an effect, and the effect is even stronger if plants are involved. Also, plants themselves, change the soil, and help to move the plant community to a different successional stage. So, in a nutshell, how much you water, the plants themselves, the physical act of tilling the soil, and mulch really have a definite effect on the type of plant community that you have. They can, together or separately, gradually change a plant community.

Manufactured mulch, including cardboard, is a mixture of chemicals, and ground up pine trees, seems to confuse/inhibit plants, and may have compounds that are not good for an edible garden, or the microorganisms that live in the soil. This product would be much better in a recycling bin. If plants share water and nutrients, they must have some sort of system of communication. Yes, they do, and one way they do this is by way of signaling molecules, containing phenol. So when cardboard is emitting all of these phenolic compounds such as 3-propylphenol, 3-methylphenol, 4-methylphenol, 4-ethylphenol, and 2-methoxyphenol, the plants communication network breaks down. Cardboard has a negative effect on companion-oriented plants.

Shredded tire mulch/plastic mulch is made of oil-based compounds and seems to have terrible effects on plants, as again, the phenolic compounds in these products mimic the signaling molecules that plants use to communicate with each other. Also, the chemicals are somewhat toxic, and would not be good for an edible garden, This product would also work better in a recycling bin/recycling center.

Fir mulch may work o.k. if you live in a fir forest, and you want to use the mulch for the upland portion of your garden.

Redwood, oak leaf, or cedar mulch seems fairly neutral, short term, for most wildland plants, until the plant creates its own mulch.

Straw mulch seems to be o.k. for most of the upper alluvial area species after they have reached maturity.

Compost of garden, crop, kitchen vegetable and fruit trimmings, and animal manures, would be best tilled into a lower alluvial area garden.

Soil amendments in bags are usually best used for an ornamental garden, as you have no idea what went into it. In most cases, putting this material on an edible garden is not recommended. Many of these products are made of green waste, with secondary pollution, are not sterilised, have high pathogen (bad bacteria and fungi) populations, are probably detrimental to soil microorgansims and smell bad (If the bag smells good, it might be o.k. if choices are limited).

Rock mulch- natural in many areas, great in desert areas for a mulch for desert plants. Pretty much does not have a short term inhibitory effect, but helps with moisture retention, cooling of soil temperature, shading of plants, and has a positive effect in dry climates such as much of drier areas of California. This mulch would work fine in combination with the shredded redwood bark mulch for a dry upland zone. Do not put rocks in an area where you will till the soil.

Plants as mulch- Plants don't seem mulch-like, but under living plants the soil is cooler, temperature in the immediate vicinity is moderated, moisture is conserved, effective rainfall is increased, and so in certain situations, this works well.

Weeds are bad. We are not talking about the occasional unobtrusive weed in the garden; we mean a full-blown invasion and takeover! Some of these weeds are on the "100 of the worst global invasive herbaceous plant species" (www.issg.org), and are causing havoc in many Mediterranean areas on earth. They mostly take from the plant community and contribute little or nothing. They reduce biodiversity, are only geared for reproduction, and do not share water and food with other plants via mycorhhizae. For example, researchers have found that Erodium, or filaree, is mycorrhizal, receives food and water from other plants, but does not send food and water back to other plants. So if you do not aggressively weed out plants such as filaree, or other similar weeds that are pests in your area, your garden will go into sharp decline.

For upland areas, try to cut off large weeds below the crown, pull smaller weeds, only during winter through spring. To repeat, if weeds are pulled in drier times of the year, this may break mycorrhizal strands during their dormant period, when they will not regrow, inhibit movement of nutrients and water between plants, and plants may suffer and die.

Also, weeds can be replaced by your garden plants as much as possible. Filling the garden space with many different types of compatible plants, as many plants as the site will allow, will help to displace the weeds.

Many weeds are encouraged by soil disturbance, such as tilling, and burning plant debris.

Tilling the soil destroys the underground nests of many important pollinators, kills many soil organisms, impacts the structure of the soil, degrades the soil, increases carbon loss, and increases erosion.

Different Mulches for different planting areas: Riparian area- no mulch except rocks here and there. Lower Alluvial Area- no mulch, but natural compost, and/or manure tilled into the soil, for brassicas, etc. Upper Alluvial Garden area- mulch of straw/dried grass/aged animal manures/compost. Riverbank/Bridge /Orchard Area- There are a variety of options, depending on what your purpose is. One option when trees, and shrubs are small is to plant annual flowers, around the base of the plants to cover the ground and form a living mulch. Between the orchard rows you can plant legume cover crops that you mow, or annual field crops, such as grains, beans, peas, etc. As the trees become older, you can plant perennial herbaceous plants, as understory under the trees. Some authors have recommended compost mulch under the trees. Upland/Wildland Area- redwood, cedar, or oak leaf mulch. 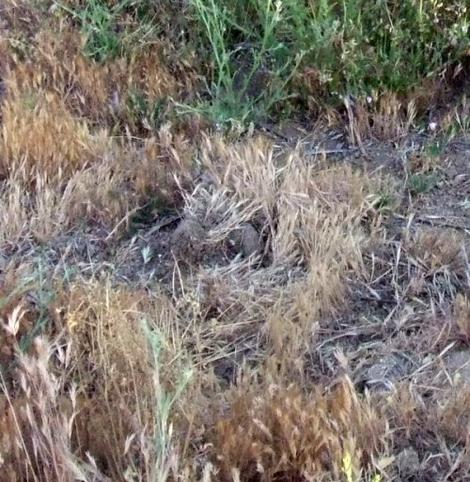